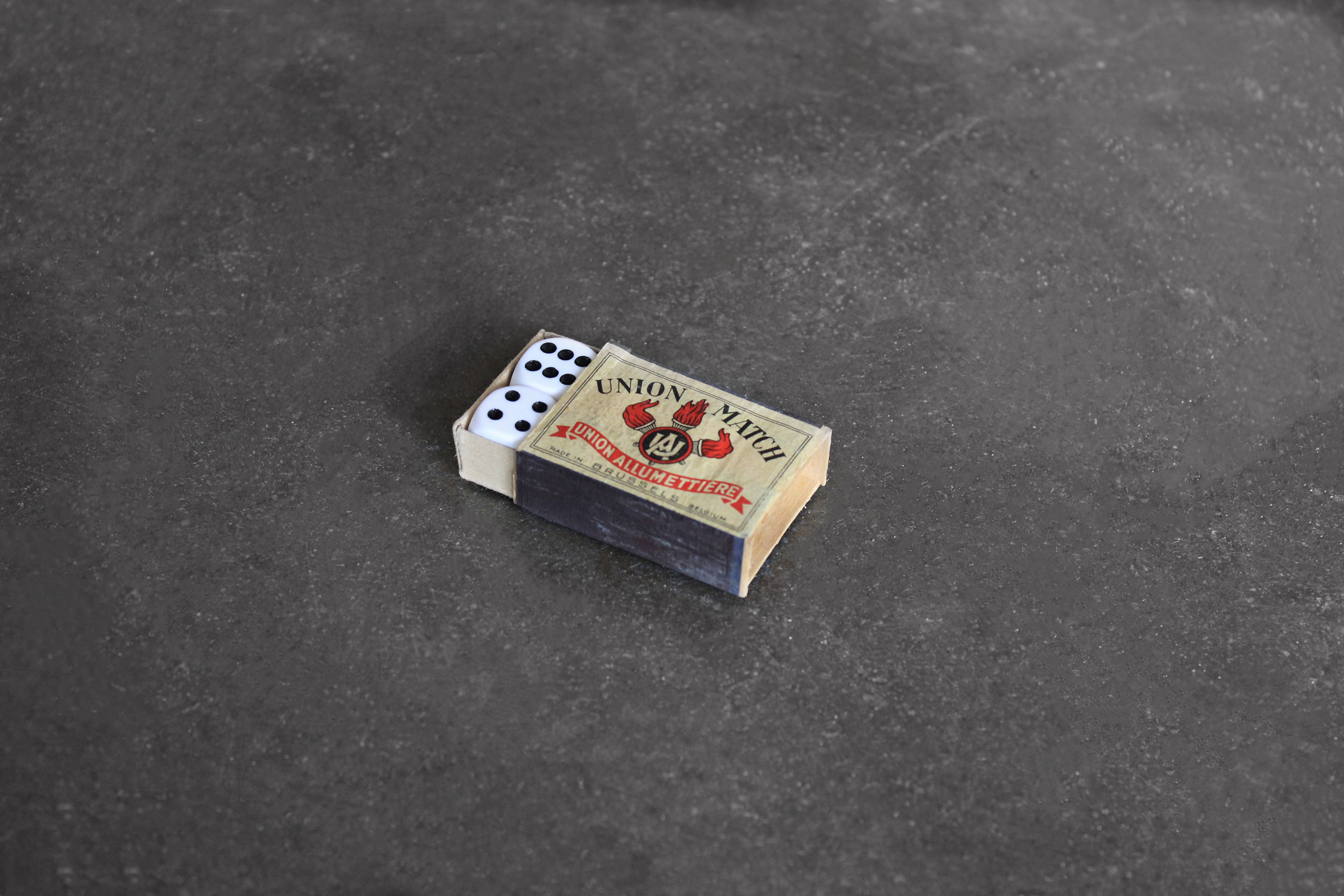 Dr. Ahmed KhlaifMankhi
Maysan University / College of Basic Education / Department of Art Education
Country: Belgium.
Artist: Mohamed Al-Ani.
Business name: Untitled.
Year of production: 2020.
Material: a matchbox of paper and two dice.
…The work is embodied from a matchbox with two dice inside, and the matchbox has opened a hole the size or length of the dice, and the dice have taken up space or the upper part of the matchbox completely This gave the feeling that the box was full of dice and the matchbox was placed directly on the ground. The simplicity is represented by the artist Muhammad Al-Ani, as he did not use complexity In proposing his idea through the artwork, and he selected things carefully and thoughtfully planning and directed them in this way, he certainly made a lot of experiments until he settled on this formation Final. The artist has warned about the importance of the small thing, and we do not care about small things despite our frequent use of them, but we do not look at them despite the accuracy of their manufacture. The method of presentation alerts us to the fact that the things that we throw or that are on the ground that do not arouse any importance to passers-by when they see them, despite their special aesthetic kind, it is presented to us The artist is a work of art based on conceptual values, visual dazzling and unpredictability, so that the recipient does not expect the artwork to be of this size and was presented on the ground, so he expected that It is displayed in a distinctive, elegant place, perhaps because of its size. There may be many viewers who do not notice it and may be accidentally crushed with their feet or some think that it is just garbage Perhaps he wanted viewers to see their reaction to this work and what they comment, and it can be considered as a kind of alert to everything we see, in which there is privacy, thought and beauty if they can Seeing differently or changing our vision of our surroundings. The work achieves an intellectual dialogue between the recipient and himself, and this dialogue continues for a long time with the recipient trying to set answers for each Questions that passed through his mind. The use of ready-made objects circulating in society as works of art reminds us of the works of Marcel Duchamp, such as the bearer of the bottles and the shovel of snow, as well as the works of pop artists as Andy did. Warhol uses Coca-Cola cans, brillo cans, and Campbell’s soup, as well as Roshambirke’s doing by employing ready-made things as part of his artistic work, except that the artist Mohamed Al-Ani One ready-made thing was not employed, but rather the merging of two ready-made things. What distinguishes the artist Mohamed Al-Ani is that he did not adopt a specific artistic direction or ideology, but rather he was interested in aesthetic artistic proposals with aesthetic values. And with a clever critical vision, the dice suggests to us what we do like a gamble that depends on luck in this world, and this is what the matchbox hole suggests, as if it reminds us of an experiment or action we are doing and The results depend on what we do, as if it were a dice. You need luck despite our great capabilities, and this is what we saw about what happened to the world in 2008, which occurred the crisis The global financial system that toppled the gigantic sober companies that declared their bankruptcy, and this process was repeated as the Corona pandemic swept the world. The artist has achieved shifts, both at the level of The style, directing, display and employment, which made the recipient move to unlimited multiple shifts for what he received from unconventional proposals, so these called for actions, ideas and feelings Full of poetry and passion, she tries to search in various directions and arts through memory, and the artist Muhammad Al-Ani succeeded in controlling and drawing the recipient into a circle and influencing him. Intellectually, artistically and aesthetically